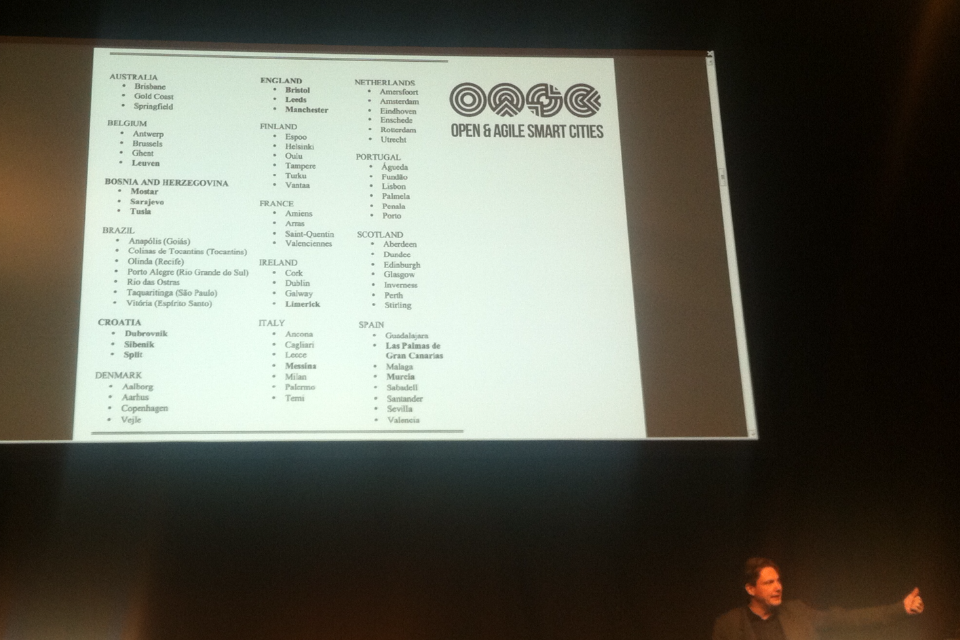 The Open & Agile Smart Cities (OASC) initiative has welcomed 14 additional cities making a total of 75 cities on three continents, all working together to accelerate smart city development and create a global smart city market based on simple, open standards. New member cities from England, Croatia, Bosnia and Herzegovina were introduced at the Smart City Expo in Barcelona in November.

BARCELONA, 25th November 2015: The OASC initiative was launched less than one year ago and has experienced serious growing pains ever since; and 14 cities have joined the existing country networks from France, Ireland, Brazil, Australia, Scotland, Netherlands, Denmark, Italy and Spain. All cities have signed the OASC Letter of Intent to drive global smart city development based on city needs by implementing three simple standard mechanisms. This brings the total of OASC cities to 75, representing 15 countries. Representatives from the newest OASC cities were present at the third wave launch, taking place in the UK Pavilion at Barcelona’s Smart City Expo 2015. Among these was Coco Gakovic, founder of CityOS.io, representing the Bosnia-Herzegovinian cities of Sarajevo, Tuzla, Mostar and Bihac:

“It is with great pleasure that we are looking forward to be active part of OASC, to learn, to share and to contribute to this wonderful initiative. OASC is designed to bring people of many cities together, around common goals, dreams and standards. Standards that promote better living in better cities,” he said. Bosnia-Herzegovina is already mature in terms of smart city development, and Coco Gakovic explained how locals use CityOS, a set of templates, frameworks, events, open architecture solutions and more to kickstart smart city development and empower citizens to change their own cities:

“Our enthusiastic group of young developers, engineers, makers, architects, UX designers and many others has already started to contribute through CityOS This was the logical extension of what we value and do. Thank you for the OASC initiative and thank you for having us.”

Bosnia-Herzegovina is not unique in already doing very well when it comes to smart city development – and in seeing the value in linking on a global level and learning from each other: The OASC initiative launched less than a year ago, in March 2015 at the large computer expo CeBIT in Hannover, Germany, with 31 cities

Smart citizens and market creation
The objective of the OASC initiative is to use the collective wisdom of diverse cities to create a global smart city market that allows the development of applications/solutions once which subsequently can be utilized by multiple cities. Some OASC cities are big, some are small, but interestingly a lot of the means are the same. Represented by Dubrovnik’s Smart City Lead Coordinator Nikša Vlahušić, three of the smaller cities – Dubrovnik, Split and Šibenik – were also present at the launch in Barcelona:

“In past few years we have been mostly focused on empowering citizens, developers, makers and hackers to start their own startups, and to seize the opportunities that are available in ICT sector. In that time the Smart City concept was evolving to what we now call the 3rd generation of Smart Cities, now it’s all about citizen inclusion and that’s great; you can’t build smart cities without smart citizens!”

Nikša Vlahušić moved on to emphazise the value of finding and using common standards:

“With such wide adoption of the concept it became apparent that standardisation is next logical step. Standardisation provides immeasurable benefits for all cities and stakeholders, from easy evaluation, replicability, scalability, to creation of new international market for Smart City projects and solutions. We were delighted to find out that there are more cities that that are going in this direction and we see the OASC initiative as only true way to amplify mutual cooperation and networking between all involved. We would like to thank OASC initiative for all the hard work and at the same time congratulate everyone who decided to join this innovative and bold endeavour.”

Many cities that have signed the OASC initiative are members of EUROCITIES, the network of major European cities, and are therefore committed to work together on complex challenges facing cities such as the digital transition. The OASC initiative complements activities under the European Innovation Partnership on Smart Cities & Communities, the European Commission wide formal umbrella for dialogue with supply side (industry sectors) and demand side (local & regional authorities) stakeholders.

The Open & Agile Smart Cities initiative, born global, driven by its national networks of cities— through the OASC Task Force and Secretariat—is related to the European Innovation Partnership on Smart Cities & Communities and to DG CONNECT Net Futures of the European Commission. The next OASC event, The Connected Smart Cities Conference 2016, takes place in Brussels in January 2016, and the fourth wave launch presenting new members is expected to take place in February.