Ten new cities joined the OASC global initiative at the IoT Week in Geneva. Together with the Mayor of Carouge, OASC chair Martin Brynskov announced a 6th Wave of new members working together with over 100 other cities worldwide to establish a global smart city market based on city needs 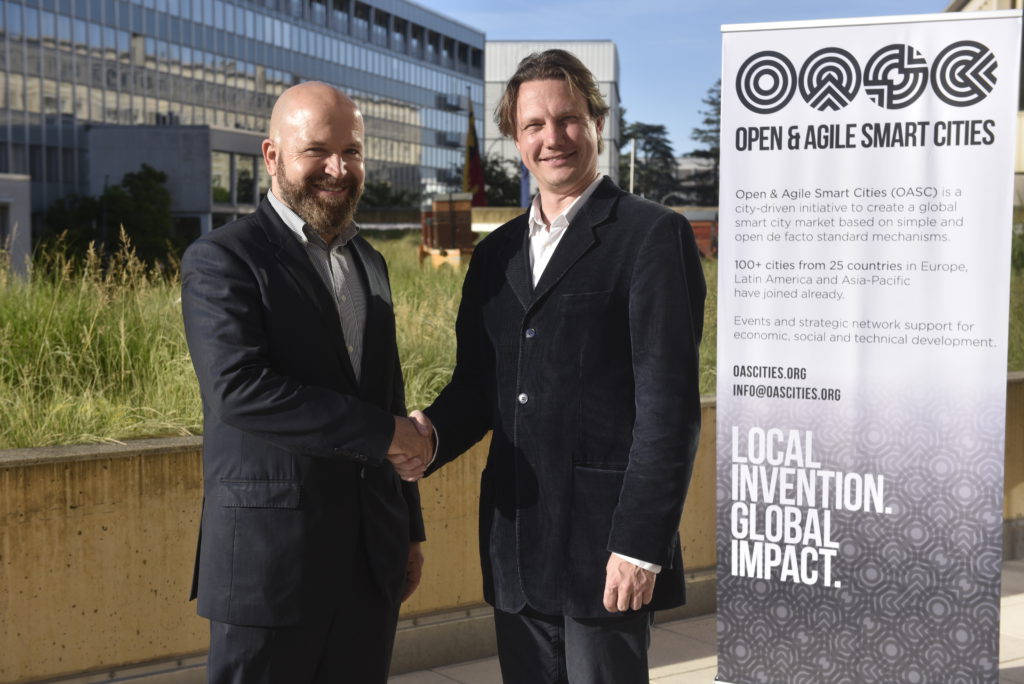 The OASC initiative now includes 114 cities from 23 countries working together as they share best practices and shape technological underpinnings of economic and social benefits that global smart cities can offer. Together with current members, these new cities bring a wealth of smart city knowledge and concrete activities to the network.

Mayor Nicolas Walder of Carouge spoke at the reception and stated: “The City of Carouge, member of the SynchroniCity IoT Large Scale Pilot for smart cities, is leading the Swiss innovation in the smart city area. We are thrilled to join this fantastic group of motivated cities and we really look forward to work together to share experiences from across the globe that will enhance our ability to serve our citizens locally, to increase the sustainability and to protect the climate of our planet.”

Sébastien Ziegler, Chair of the IoT Week and President of the IoT Forum said: “The extension of OASC towards new countries, such as Switzerland, and its inclusiveness strategy is paving the way towards more IoT interoperability within and among smart cities, at a global level.”

Martin Brynskov, Chair of OASC, announced that OASC, which is based in Brussels, is incorporating as a nonprofit association. Brynskov indicated that the legal formation should be completed within weeks.

“This shift is a natural evolution of our original intent when OASC was formed as a more informal, bottom-up movement,” Brynskov noted. “Incorporating now makes sense as it matures our capacity to give cities a strong voice when establishing standards, while allowing us to be more globally responsive to market and policy opportunities as they arise.”

If your city is interested in connecting with other cities and join the OASC network, send an email to info@oascities.org or contact your OASC representative. The full list of contacts can be found on www.oascities.org