Both Sejong and Busan are pioneers in establishing effective and efficient solutions for the last two decades, in synch with the whole country, which has become a world leader in ICT and innovation.

“The launch of the OASC chapter in South Korea is a new opportunity to learn from each other. Cities, companies, and regulators in South Korea will inspire the rest of the world, and vice versa” 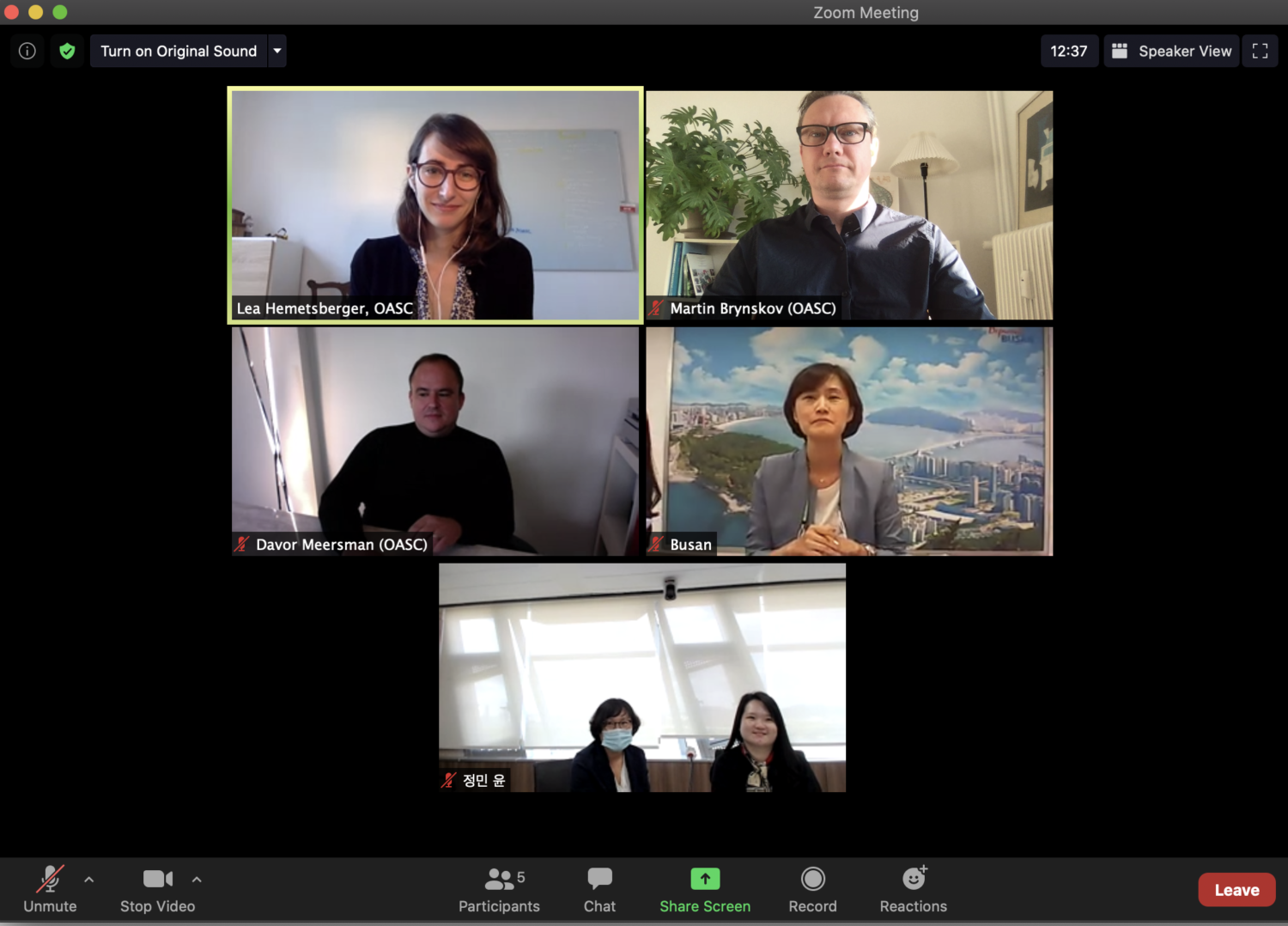 The path that Sejong and Busan undertook is proof of a cutting-edge vision on urban life and urban sustainability. For this reason, the two cities have been selected as National Smart City Pilot Projects in South Korea.

The National Smart City Project is a governmental initiative launched in 2017, to implement smart cities facilities from scratch, alongside the existing smart city solutions developed by the city themselves. National pilot projects are large projects designed to boost development and prove the applicability of a model for smart cities on the national level.

In particular, implementing new mobility solutions is a priority for Sejong. Such new mobility services in the city aimed at reducing traffic and pollution and other negative effects in traditional car-based solutions, by deploying a system of door-to-door transportation. This plan will employ new technologies – e.g. autonomous vehicles, hydrogen-fuelled or electric cars, and platforms of car and ride sharing – to increase the productive use and reduce the number of cars used.

Sejong has been putting a strong focus on citizen participation and decentralisation of decisions, through the active involvement of all stakeholders in the city affairs. This commitment has earned the city the first-ever ISO 37106 smart city certification in 2018. The ISO 37106 – Sustainable cities and communities – Guidance on establishing smart city operating models for sustainable communities, focuses on the development of truly collaborative, citizen-powered and digitally-efficient smart city models.

“Sejong City has participated in WEGO and UTA to establish partnerships with smart cities overseas. Moreover, to fortify a relative lack of network with European cities, Sejong City joined OASC. By entering the network, we intend to build a globalised smart city, share smart city solutions, and be a part of smart city standardization discussions.”

To build international relations, Sejong is organising its first Sejong Smart City International Forum in April 2021. More details will be published and shared with members of the OASC network.

Busan, with its 3.5 million inhabitants, is the second-largest city of South Korea. It is located on the South-eastern coast of the peninsula, and the western part of the city is shaped by the Nakdong River Delta. The maritime position and the presence of extended waterways have a strong influence on the development of the city. Water is also at the centre of the national pilot project in the metropolitan city, the so-called Busan Eco-Delta Smart City.

Aspiring to become the Korean water-specialised city, Busan is implementing a smart water management system, which aims to revolutionise the entire process of urban water circulation. Thanks to interconnected facilities and Internet of Things (IoT) systems, water will be treated in plants that will supply fresh water, whose quality and quantity will be monitored through an ICT application, accessible by each household. Water recycling and eco-filtering systems of the natural waterways, along with green public infrastructure, prioritise people and nature at large.

Responding to the Impact of the 4th Industrial Revolution

Busan wants to improve the lives of its 3.5 million inhabitants, leveraging all opportunities of the so-called fourth industrial revolution. In this regard, the national pilot project also acts on energy, transportation, safety, urban life and culture. Building the smart city as a living lab, new services, such as robot-based services will be tested and, if successful, introduced in public infrastructures to monitor facilities, patrolling the streets, measuring fine particles, and assisting with parking and returning cars to drivers.

“Cities and communities worldwide see the need to connect and learn from each other. OASC plays a vital role in connecting cities and I’m excited to welcome Sejong and Busan to the network. This is a validation of our work to establish a global market based on open and common technical enablers , where city services, solutions and data can be shared seamlessly.”

Open & Agile Smart Cities (OASC) is a non-profit, international network of smart cities & communities. Together with our international member cities and partner organisations, and based on our core values – openness, agility, and cooperation – OASC is building the foundation for a global market where digital services can scale sustainably. As the largest network for smart cities and communities, OASC creates sustainable impact for our member cities by working towards a common technical ground which allows scaling and sharing of urban digital services based on open standards, open APIs, and shared data models. We call this common technical ground Minimal Interoperability Mechanisms.